Power from plants, and what it means for conservation

The power of 1 hour of solar energy reaching our planet is equivalent to our current annual global energy consumption. Nature knows this – virtually all life depends on photosynthesis in the food chain. Photosynthesis is the process through which plants use sunlight to convert carbon dioxide (CO2) into carbohydrates to fuel their growth and other activities.

Plants have become masters at capturing the sunlight they need to survive and grow.

It’s fascinating to walk through the Amazon rainforest and think about the sheer power that’s absorbed daily from the sun. However, we can’t easily harness or convert the same source into electricity without solar panels. Yet interestingly, electricity can be derived from the biological processes within living tissues and during the breakdown of organic matter in the soil, so it is possible to generate bioelectricity using plant-based bioelectrochemical systems and microbial fuel cells.

Trees don’t sprout USB sockets, so there’s nowhere to charge your equipment when you’re off grid.

I’ve been experimenting with microbial fuel cells (MFCs) for the past few years, working with Paolo Bombelli from Cambridge University’s Plant Science department. I was first drawn to his work after discovering MossFM, a project by Fabienne Felder and Paolo that used pots of moss connected in series to generate enough current and voltage to power a radio for a short period of time.

In Principe island we installed an experimental MFC in the garden at Here Be Dragon’s (HBD) office. Chilli plants were subsequently planted on top of the fuel cell, and water added to keep the cell wet. The carbon mat visible in the photograph below was added as an anode and a cathode is required in the system to enable protons generated by bacteria breaking down organic matter to flow, generating millivolts of electricity.

The ongoing challenge has been to ultimately scale up the potential of fuel cells and bioelectric systems to deliver enough electricity to power small microcontrollers and sensors in the field. This is where conservation programmes wishing to better understand how threats such as climate change, habitat loss and change over time can be offered value.

Plugging in to plants unlocks the potential for ultra long term and remote monitoring programmes to deploy sensors, monitoring platforms, camera traps, or other electronics that require remote power and must operate for extended periods of time.

Another important factor to consider is the limitation of existing power sources for field-based sensors and electronics. Batteries must be replaced overtime, and at scale, that may mean many hundreds of hours visiting remote devices, which can be costly in both time and expense. Solar panels are excellent, so long as you have sufficient sunlight. In cloud forests, or beneath a dense rainforest canopy light is limited – however, plants survive in the shade and naturally grow and move into position to maximise the potential of absorbing sunlight. If we could harness plants to help generate small amounts of electricity we could quite literally “plug in to nature”.

To further unlock the potential of generating electricity to power sensors and small microcontrollers in the field, the Arribada Initiative has teamed up with Open Plant to offer an award of £10,000 to architects, engineers, designer and scientists who have experimented with fuel cells and bioelectrochemical systems to join forces and help to develop an open source prototype.

Can you design and manufacture a prototype open source plant-BES (bio electrochemical system) to power a camera trap and environmental sensors in tropical forests?

The Arribada Initiative has teamed up with Open Plant to offer an award of £10,000 to teams and individuals able to help develop an open source bioelectric system prototype.

Launched today on wildlabs.net, we are accepting the submission of concepts up until the 30th April 2018. Can you design and manufacture a prototype open source plant-BES (bio electrochemical system) to power a camera trap and environmental sensors in tropical forests? Learn more or apply here to be in with a chance of winning the £10,000 award to cover the development and manufacturing costs of the prototype system. 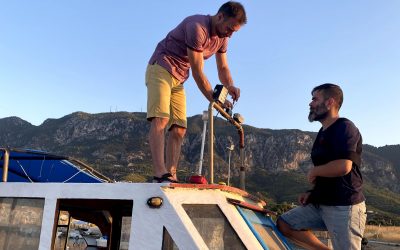 Getting started Tracking the movement and location of small fishing vessels requires a low-cost and scalable solution....